The decisions most of us are faced with on a regular basis don’t compare to the scope of Hewlett-Packard’s disastrous decision to acquire Autonomy or the New York Yankees decision to sign Alex Rodriguez–deals considered by many to be the worst in the annals of corporate and sports history.

And because most of our decisions don’t involve a merger, the estimate that 70 to 90 percent of all corporate mergers fail probably doesn’t enter our thinking when it’s time for us to hire, launch a new product or service, or set our annual budget.

But we should be thinking about these things. If some of the highest-paid, most esteemed and successful businessmen in the world could be so wrong, who’s to say we have the tools to make better decisions for our businesses?

Like every company, content26 has its share of daily, seemingly benign decisions to make–hiring, promotions, process tweaks–and we’ve also had our share of the potentially transformative decisions: IT investments, layoffs, merger offers, and partnership proposals.

This past year, for instance, we faced a decision we knew would result in an immediate 30 percent hit to our top-line revenue. That decision led to three months of uncertainty but now, nine months later, it has blossomed into unprecedented opportunities for us.

The human brain is a well-oiled machine when it comes to “cruise control” decision-making (merge left, slow down, call mom, pick up the kids). We happened to get that decision right, but generally speaking, when it comes to employing the more thoughtful and rational processing power, the latest research in neuroscience and behavioral psychology strongly suggests that we humans are actually hard-wired to usually get it wrong.

So leaving our egos at the conference-room doors and opening ourselves to the wide array of decision-making advice is what we decision-makers should be doing. While there is more well-grounded advice on decision making available today than ever, I’ve found three particular books to be a huge help in improving our company’s decision-making processes: Daniel Kahneman’s Thinking, Fast and Slow; The Power of Habit by Charles Duhigg; and Decisive by Dan and Chip Heath. 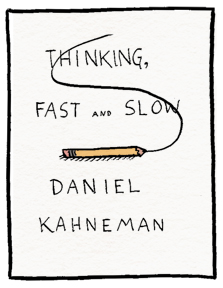 Without question, this summation of forty years of research by Nobel Laureate Daniel Kahneman and his late colleague Amos Tversky is a game changer. It’s a brilliant primer on how our brains make judgment calls and has had a profound impact in many fields, including medical research, organizational development, legal practice, economics, and education. If every CEO in the world were exiled to a deserted island, this is the one book I would slip into their carry-ons.

Of particular importance is Kahneman’s attention to the brain’s built-in heuristics. Heuristics, which can be thought of as shortcuts or rules of thumb, are processes the brain employs that give us quick access to the solutions we think we’re looking for. They play an important role in helping us adapt to our changing surroundings quickly, but because they are built up over time from a combination of influences such as genetics, culture, and our limited personal experiences, they can also spit out extremely biased answers that lead to disastrous consequences.

In other words, if we’re not aware of how our brains are hardwired to produce biased results, the gut feelings that seem so right when we arrive at decisions will likely produce an overly narrow set of options that falls short of what our business requires to be successful. While Thinking, Fast and Slow is more descriptive than prescriptive, it provides us with the tools to understand our brain’s limitations, a necessary first step in improving our decision-making processes.

The Power of Habit: Why We Do What We Do in Life and Business

As a company, we recently identified what Duhigg calls a poor keystone habit–a pattern that can have a casacading effect on other habits–that was slowing down our sales cycle.

As a result, our costs of sales were higher than they should have been and our cash flow was suffering. Successfully addressing this particular sales habit has not only helped us close deals faster, it has had the unexpected trickle-down effect of radically shifting the way we make decisions at every level of the organization.

Duhigg points to poor keystone habits as some of the prime culprits of poor performance within organizations. His chapter on Paul O’Neill’s tenure from 1987 to 2000 as CEO of the aluminum manufacturing company, Alcoa, is alone worth the price of the book. By making worker safety his key initiative upon taking over the position, O’Neill effectively set into motion a series of changes that transformed Alcoa at every level, from the decision-making processes at the factory floor to communications between executives. By the end of his first year, O’Neill saw Alcoa’s profits hit a record high, and by the time he retired in 2000, the company’s market valuation had increased from $3 billion to $27 billion.

Duhigg reminds us that sometimes the best way to address a problem is not to address it directly, but rather to search for factors that impact the problem. In our case, identifying the keystone habit in sales helped lead to more efficient processes throughout our company.

Decisive: How to Make Better Choices in Life and Work

This is by far the most practical book about decision making I have come across. Dan and Chip Heath rely heavily on Kahneman’s research and have come up with a neat prescription that can help improve decision making across an organization, WRAP, which stands for:

As the only prescriptive book on this list, Decisive offers dozens of practical suggestions that vastly improve an organization’s decision-making processes. In fact, I’d argue that a Kahneman / Heath Brothers U.S. tour would be the hottest business ticket in town. WRAP offers real-world instructions based on Kahneman’s research.

While examples of how Decisive has improved our own decision-making processes are too numerous to list, the most significant impact has come from their “widen your options” advice.

Speaking from my personal experience of having run content26 for nearly 10 years, it’s always comforting and admittedly ego-building to receive confirmation that my intuition on how to solve problems is spot on. But it’s proven several times over to be far better for our business to seek out advice that questions the assumptions of my intuition. Widening our options on such issues as choosing consultants (or not), considering partnership agreements, and making staffing decisions has led to a much slower, more uncomfortable, but overall far more rewarding way of doing business.