From digital assistant Alexa to its marketing efforts with AMS, Amazon is clearly not only a leader in online retail but in the broader world of technology and online strategy. One of the newest innovations to enter Amazon’s mix is augmented reality. Amazon AR debuted on the mobile app (currently for iPhone 6 or newer only) in September, and the coming holiday season will be a testing ground for its success. The feature is clearly in its infancy, but it shows potential.

What is Augmented Reality Shopping?

Augmented reality shopping allows consumers to combine their current surroundings with potential purchases. In Amazon’s case, AR uses the phone’s camera to show a live view of a scene (your living room, for example) and overlays a selected item (like a couch) into the display. Users can rotate the item to fit their preferences. You can see it in action in this promo video.

Amazon has also gotten a patent for making virtual objects reflect light the way it is in the AR environment. This would make the AR look significantly more realistic. If you’re interested in the technical details, you can read more about that here.

What Other Ways Has AR Been Used in Retail?

Especially popular in the field of fashion and furniture, many retailers have come up with some blend of digital media and the physical world. Years ago, Shiseido rolled out a make-up “mirror” that uses a camera and projects an image of a consumer’s face in real time. It allows the consumer to experiment with all kinds of make-up virtually, with no need for make-up remover.

Other stores, such as clothing retailer Topshop, have introduced virtual dressing rooms. There are also plenty of simple retailer apps that let customers swap colors of a particular style they are wearing.

Ikea and Target currently have AR features that are similar to the Amazon AR. Ikea’s AR feature is built using the same platform as Amazon: ARKit from Apple. It lets consumers place furniture into their spaces and capture photos. The Target feature can be found on its mobile site and uses a photo (either shot real-time or uploaded) as a background for a product.

Amazon debuted its AR in September this year, and the Q4 holiday push will be a key testing ground for the success of the new service. In fact, Amazon made the announcement about their AR feature as part of their announcement that the Black Friday deals store was open. 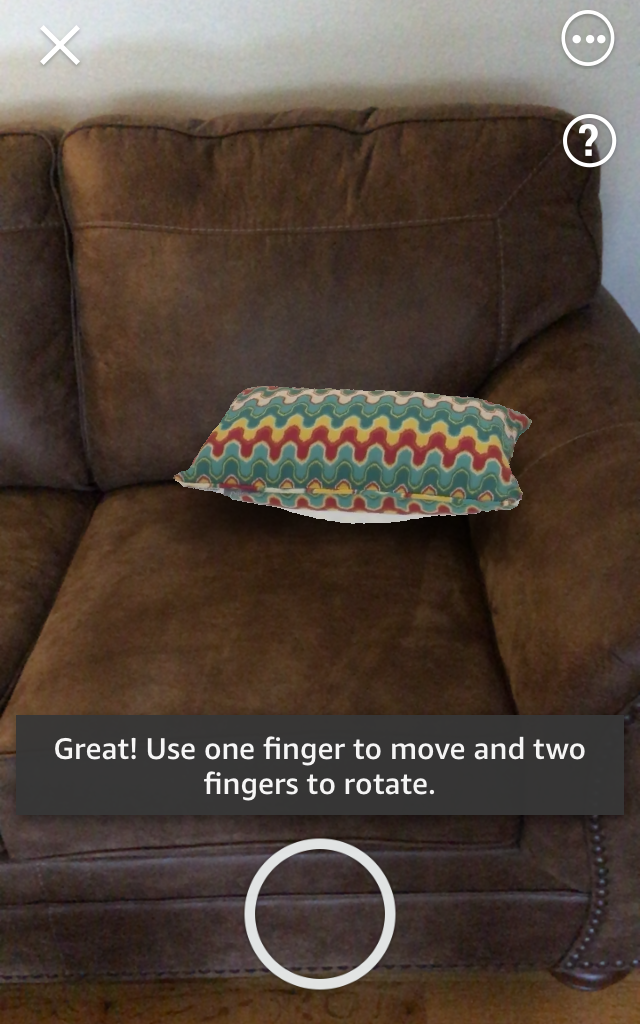 What Amazon thinks a pillow would do for my couch

What Does Amazon AR Means for Your Brand?

Augmented reality is another way for retailers to make online shopping more convenient and practical. A long-recognized benefit of in-store shopping is the ability to touch or hold a product. While many tactics for online sales try to compensate for this fact (don’t forget about your high-quality photos and product information), AR introduces a feature that only door-to-door salesmen have previously been able to offer: seeing a product in your space.

Like it has in so many other areas, Amazon AR will set the pace for other online retailers. Should the feature see success this Q4 and begin rolling out more broadly, we can expect other retailers to follow suit with AR that is in the vein of what Amazon offers.

Currently, there isn’t much to do while we wait and watch. It is possible that Amazon or other retailers will begin requesting 360 views of products, or products themselves, in order to provide the ability for a consumer to rotate an object.

How Augmented Reality Can Enhance Your E-Commerce Presence