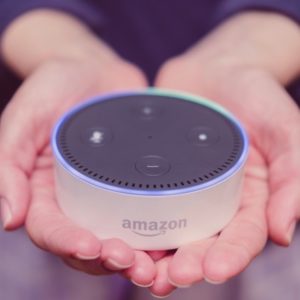 Consumers’ ambivalence toward advertising is legendary. They tolerate it – as long as it doesn’t interrupt, annoy, seem cheesy, or too obviously trying to persuade them.

Amazon has taken steps to prioritize user experience over monetization, denying media reports that it is in talks with several large brands to debut ads on Alexa in 2018.  Amazon’s obsession with customer service leads us to believe they won’t introduce Alexa advertising until they’re confident it enhances the final user experience.

Last year, Amazon pulled back on advertising within its Amazon Echo Skills, the voice-enabled, third-party developed apps. The ban specifically targeted interactive ads that would imitate conversations with Alexa, the voice-powered digital assistant.

At this time, Amazon allows only specific, unobtrusive forms of Alexa advertising.

Given these limited promotional opportunities, ranking well in organic search and paying attention to keyword-optimized content remain the best strategies for brands to get noticed on Alexa.

Interest in voice-activated advertising is predictably high. But early forays into voice advertising have been met with skepticism.

First came a storm of negative press when the Google Home assistant tacked on a promo for the movie “Beauty and the Beast” when users asked for information about their schedule.

Then, Burger King released a 15-second television ad intentionally designed to trigger Google Home speakers. Without approval, the ad activated speakers when it aired on late-night TV, causing the devices to recite facts from the Whopper’s Wikipedia page. The ad, found by some to be hilarious and others to be a terrible gimmick, also prompted concerns about privacy.

Amazon’s response was to update its developer agreement to ban most advertising in Alexa Skills, curbing a network of interactive ads that were slated to be released by the startup VoiceLabs. These ads, for clients such as ESPN, Wendy’s and Progressive Insurance, were designed to be interactive.

But the new policy banned all Alexa advertising that used her voice, referred to Alexa, or imitated Alexa’s interactions, leaving few acceptable venues for ads. This caused a halt in the monetization of the Echo.

Organic Search Ranking is Key to Getting Traction on Echo

Although Amazon ratcheted down on Alexa advertising, brands can still leverage their Amazon ad spends to improve Alexa visibility.

By identifying successful keywords from ad campaigns and weaving them back into product page content, companies can lift their products’ rankings in organic search.

While Amazon prioritizes user experience over monetization, brands can win on Alexa by paying attention to keyword-optimized content.

Most industry experts expect Amazon to roll out advertising on the Echo eventually, so brands should consider honing their general Amazon advertising strategies while they wait.