“Buy from people, not the Internet.”

Among thousands of silly marketing slogans, the one shared by Buy.com and its Japanese parent-company Rakuten offers more substance than most. In an environment where some consumers picture mega-e-tailers as “vending machines,” Rakuten Buy.com tries to distinguish itself as a marketplace in which customers can connect with real-life merchants.

“We don’t throw a cloak over the merchant but instead introduce you to shop owner,” Rakuten Buy.com CMO/COO Bernard Luthi recently told us in an interview. “We want you to discover who that merchant is.”

Buy.com has been around and evolving since 1997, when online retail mover-and-shaker Scott Blum founded the company. The initial model was an innovative one: Buy.com sold computers and electronics at just below cost, making up the difference in advertising, warranty sales, product leasing, and other services.

Blum’s chronology of involvement is memorable. He sold the company right before it went public in 2000. After stock tanked, Blum bought the company back at a fraction of the former value, then quickly led it back to respectable standing.

Since its beginning, Buy.com has gone from working with 100 vendors and selling only computers and electronics to partnering with several thousand merchants and offering 14 million products across most major categories.

In 2010, Japanese e-commerce giant Rakuten liked what they saw enough that they acquired the privately held Buy.com for $250 million with hopes of increasing global competitiveness and going toe to toe with the biggest and best. By that time, Rakuten had already far exceeded Amazon in sales in Japan—no minor feat.

Rakuten has transformed Buy.com into a merchant-centric online marketplace that emulates a real-life mall, where stores operate autonomously.

“Unlike our competitors, we don’t compete with our merchants, we give them the tools to market and sell,” Luthi said. “Our entire objective is to create a profitable revenue stream for them. Merchants respond very favorably to that.”

Since the acquisition, Buy.com has ratcheted up its merchant-centrism. The site’s homepage showcases third-party vendor-specific “stores,” putting a human face to e-commerce. This philosophy, presumably, is meant to soothe vendors who feel mistreated by other big e-tailers that might charge the vendors exorbitantly, just to stock and sell items themselves once they reach a certain level of popularity. 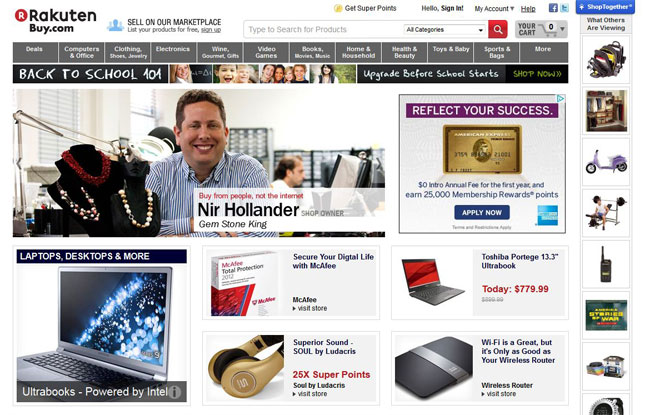 Buy.com is not without its flaws, though (nobody’s perfect). Some customers have complained of unresponsive or hard-to-find customer service.

Additionally, the great degree of freedom given to merchants sometimes lends itself to low-quality product pages. Since manufacturers don’t sell directly on Buy.com, they rely on merchants to develop good product pages for the site. And that doesn’t always happen.

This, in turn, can lead to customers receiving products that don’t exactly match their expectations—and that’s bad.

But Does It Work?

However, the biggest challenge facing Buy.com and Rakuten is whether their “marketplace model”—composed of personalized, third-party virtual stores—in fact has enough advantages to topple other e-commerce giants and their traditional, centralized model that has worked so well. Do consumers care whether they’re buying from people or from the Internet? We’ll see.

The e-commerce game of thrones will be an intriguing one to follow. Be sure to check out my colleague Trinity Hartman’s interview with Rakuten Buy.com CMO/COO Bernard Luthi.