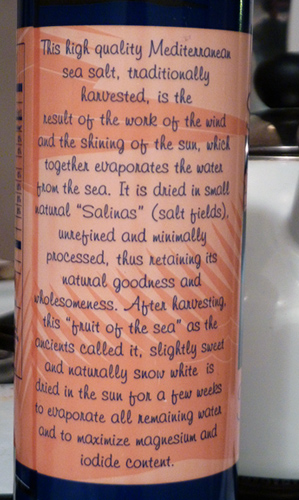 Count on Trader Joe’s to give sea salt whimsical origins involving “the work of the wind” and “the shining of the sun.” This begs the question: What else does the sun do that we’ve been missing out on all these years? It also kicks off my content blooper analysis with a simple case of noun-verb disagreement. The wind and the sun together evaporate water, not evaporates water.

However, that phrase is not the prime offender here. Please direct your attention to the last sentence of this poetic passage, which begins “After harvesting… .”

What this sentence means to say: The “fruit of the sea” (sea salt), is slightly sweet and naturally snow white, and it is dried in the sun for a few weeks after being harvested.

Imagine the fun diagramming this sentence might inspire in an intro to linguistics class.