Last week, I bought my boss’s daughter a t-shirt without ever leaving Facebook, despite my concerns about the material it was made of. I did this to investigate the status of F-commerce.

While it made me believe F-commerce has a long way to go, the experience was an exciting herald of the future. Or was it?

Conversion Rates Are Dismal for F-Commerce

Forrester Research‘s vice president and commerce expert, Sucharita Mulpuru, believes people will not hand over their credit cards. Or at least, that F-commerce will never fully take off as a successful business strategy. Based on nearly two dozen interviews, Mulpuru found that Facebook metrics are much lower than other online sales avenues. For example, click-through rates on Facebook hovered around 1 percent, while, in comparison, email marketing sees an 11 percent click-through. Conversion rates for Facebook were also around half the average conversion rates of other online venues.

But that was back in April, and times are changing so fast in the world of technology that it may already be time for the Forrester analyst to say she may have been wrong.

Here’s the thing: Mulpuru was looking at what is currently happening and whether retailers are currently benefiting, not whether they could in the future.

These low conversion-rate metrics also may not reflect the site’s true potential. In last week’s F-commerce post, I looked at several Facebook stores, and most of them were as abysmal at selling products as our own Audrey Hepburn is at answering the phones (despite our best efforts, she always manages to confuse the callers–even those who speak German).

Though current revenue is not high for retailers on Facebook, potential is still coursing through the air and abuzz across the Internet. The CEO of China’s premier social network, Renren, has said in the near future, he anticipates 50 percent of active users to pay for goods through the site (subscription required), making e-commerce (F-commerce… R-commerce?) the majority of its revenue stream.

Of all the studies, facts, and talking heads debating F-commerce, a recent study by marketing communications agency JWT may be the most compelling argument to start selling your goods on Facebook–now. They found that the up-and-coming generation of Millennials is not only happy to toss their money through the site, but hopes to be able to.

Turn your eyes to this revealing chart they created: 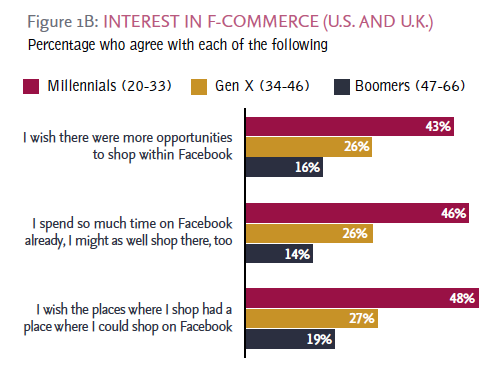 Not only do almost half of the users hope to be able to shop on Facebook, half of the users in both the United States AND that foreign land with a different flag and the same language that used to control us want this to be an option.

If you live a solitary life in the woods of northern Canada, or in a Texas missile silo, I say don’t worry too much about this. If you live anywhere else, it is time to start crafting a merchandising strategy for your products on Facebook. We’ll be talking more about the current content merchandising landscape and how you can navigate across it in our upcoming post, Content Merchandising on Facebook: a Nitty-Gritty Why and How-To.

Pioneers are blazing trails all over Facebook territory, and while many of the wagons are missing more than a few oxen, future vendors are certain to follow these first grooves through the ground. And not all money-making services through Facebook will be physical goods sales–Facebook Social Cinema is already in beta.

Zynga has proved with Farmville that consumers are willing to pay fake money for games, and perhaps, someday, gaming through Facebook will be a source of non-virtual profit.

Paul Marsden on Social Commerce Today goes so far as to say, “Forget e-commerce, F-commerce is next.”

I’m sure Mark Zuckerburg would love to thwart Google‘s plans for world domination. If he succeeds, how long before Facebook overtakes Amazon?

There is no doubt that Facebook would win a high school class election, but will it be president, or can it aspire to be senior class treasurer? Probably someday. Maybe someday soon.