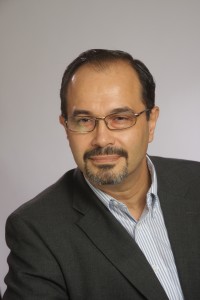 I recently put on a funny hat and piled into a photo booth with a group of friends. This was a modern, QR code-enabled photo booth… that sent me to a poorly designed, non-mobile-enabled website. For all of you who read my colleague Will’s excellent introduction to QR codes, you realize how often QR codes can act as shortcuts to disappointment and annoyance.

But it doesn’t have to be that way. QR codes have the potential to provide a bevy of useful information at every step of a product’s life cycle. What advantages do QR codes offer product merchandisers and companies that sell products online? To answer that question I caught up with Murat Divringi, a Seattle-area entrepreneur who recently launched Dynotag, a company that makes it easy for consumers to put QR codes to use in all kinds of fun ways.

Content Ping: How are QR codes being used today?

Murat Divringi: Let me start out by explaining where they come from. QR codes were created nearly 20 years ago by Denso Wave, a subsidiary of Toyota. They were created as a way to verify that the robots putting the cars together were receiving the right parts. Denso Wave actually has a patent on the QR code but has chosen not to enforce it.

Basically, a QR code is nothing more than a machine-readable alphabet. To humans, it looks like what some have called robot barf. But to the machine, it makes sense. A QR code can contain various kinds of data, but the most used one is URL data, so virtually all QR codes out there are machine-readable URLs.

There’s a lot of potential, but the use model is still in its infancy. If you scan a QR code today, most of the time it will take you to a company website. In my view, this is really a lost sales opportunity. By not linking to information specific to the product, QR codes become a disappointment to the end user.

But I believe the surface is only just being scratched.

Content Ping: Really? Where could QR codes take us in the future?

Murat Divringi: Think about science fiction and the concept of augmented reality. It envisions some point in the future where we’ll all be wearing these glasses that allow you to see halos of additional information that your eyes alone can’t see.

QR codes are a step in that direction. The augmentation device is the phone. When you’re looking at the world through your phone, it is seeing information you can’t see. These phones are becoming quite powerful. The new Microsoft phones can already read multiple QR codes simultaneously.

“For the vendors who do QR codes right, there is going to be a market advantage. It’s just a matter of time before someone figures out how to make QR codes that are really useful to consumers. At that point, everybody else will be playing catch-up.

Murat Divringi: Yes, definitely. Virtually all of the current uses of QR codes are for pre-sales marketing. The use model itself is in its infancy.

Content Ping: What role do you see QR codes playing in the retail sector in the future?

Murat Divringi: Retailers can use QR codes to deliver pre- and post-sale information that is of real value to the consumer. If you’re at the store trying to decide what microwave to buy, you can scan the QR code on that microwave and you should get product information plus any discounts or other incentives. That type of pre-sale information is extremely valuable.

Then, after you have bought the microwave, vendors have the opportunity to provide all the post-sale information you would need about the item and have it in one place.

There’s a lot of potential in the area of product documentation. At a minimum there’s a tremendous opportunity to save a lot of trees. Think about the user manual that comes with a refrigerator, for example. It’s obsolete the moment it’s printed and you can’t find it when you need it. A QR tag could contain links to the manual, the service record, a troubleshooting guide, and even a coupon for a trade-in once it turns five years old.

Content Ping: So why aren’t companies already offering this type of information via QR codes?

Murat Divringi: The technology to produce and read QR codes already exists. So it’s kind of like the iPhone. The iPhone didn’t contain any truly novel technology, it just packaged it in a new way. And a year later there were dozens of iPhone copycats. So at some point soon, a vendor is going to come along, be it Nike or Columbia or someone, and they are going to use QR codes right, delivering value to customers. And from that point on people will say, “Aha. That is how to do it.” And QR codes will really boom.

Content Ping: But isn’t there also the chance that QR codes will remain a novelty item?

Murat Divringi: There is always going to be a novelty aspect. In any large organization there’s latency when it comes to implementing new technology into customer engagement. Now we’re waiting for the people in product management and customer retention to see the value of QR codes and integrate it into the customer relationship lifecycle. I think it’s going to be a gradual process.

What I think is going to happen is that the average user is going to find ways to take advantage of this technology way before large corporations figure it out. My company, Dynotag, aims to redefine the way labeling is done. We’re approaching QR codes from the end user point of view. I think this is a very powerful concept. What if we could just give the end user a QR code attached to a private info page and let that person define how it is used? You could put a QR code sticker in your passport and update the contact information from your mobile phone so that if you lose your passport in Rome, it could be returned to your hotel.

Dynotag also licenses the Internet-enabled Smart Tag technology to manufacturers, allowing them to get going immediately with zero infrastructure investment. For example, XYZ bags can simply choose to incorporate dynotags into their bags and their customers would get the immediate benefit of property tracking, in addition to receiving relevant info from XYZ bags.

Content Ping: Is there any advantage to manufacturers and retailers of being early adopters when it comes to QR codes?

Murat Divringi: I think so. For the vendors who do QR codes right, there is going to be a market advantage. It’s just a matter of time before someone figures out how to make QR codes that are really useful to consumers. At that point, everybody else will be playing catch-up.

The QR code is just a piece of this whole concept of making the consumer a part of the entire lifecycle of a product. QR codes become a gateway for all that can be communicated to the end user. I think it has real potential because you can embed it on any 2D surface. It’s dirt cheap, passive, and can’t be broken unless you paint over it. I think it’s a significant opportunity and, when done right, can provide extra value and help build customer loyalty.

I think QR codes are here to stay. They cost nearly nothing. Printing a sticker might cost .01 cent–not even that if there already is a sticker on the product. And it doesn’t require anything more than a smartphone to read it. So it’s very accessible and very cost effective. While it might take time for companies to catch up with the effective implementation of technology, I think QR codes are going to be used more and more in retail and e-commerce in the future.

Murat Divringi has been actively involved in designing, developing, and delivering commercial software products for over 20 years. He has led development of products that are installed in thousands of sites throughout the world, many of them Fortune 500 companies performing mission critical tasks. He is the founder and CEO of Dynotag Inc., specializing in offering state-of-the art, capable yet easy-to-use Internet-enabled labeling/tagging solutions for consumers and businesses.

Mr. Divringi holds a master’s degree in computer science from Rensselaer at Hartford, a branch of Rensselaer Polytechnic Institute.

How Augmented Reality Can Enhance Your E-Commerce Presence