Retailers Race to Keep Up with Smartphonatics

A. A person who’s both smart and hooked on phonics
B. The name of an obscure 70s Motown group
C. Someone who changes their shopping, financial, and payment behavior as a result of owning a smartphone

As much as I’d like to say the answer is B, in truth, it’s C. And smartphonatics have the attention of retailers. Why? Because smartphonatics love to shop.

“Mobile shoppers make a purchase 59 percent more often than desktop PC shoppers and over a two-year cycle will bring in 32 percent more profit,” Custora, a web and mobile analytics firm, reported in a recent study.

Wired and Ready to Buy

In an effort to keep up with tech-savvy shoppers, Best Buy announced last week it would outfit store employees with tablets. And Best Buy is just the latest brick-and-mortar to add in-store mobile technology. Retailers such as Nordstrom, Gucci, Disney, Macy’s, and Home Depot are tripping over themselves to follow Apple‘s lead, arming sales associates with mobile devices.

But do “wired” sales associates better serve tech-obsessed customers? Or is this just the latest ploy by retailers to distract shoppers from the fact that they could buy similar products for less money online?

For the uninitiated, a point of sale (POS) simply refers to the location where a purchase takes place–typically, a cash register terminal within a store. A mobile POS moves the sale from a stationary terminal to a mobile device that resembles a modified iPod touch or iPad with a barcode scanner and credit card slider.

The benefits of a mobile POS extend far beyond replacing outdated cash registers and moving sales associates about the floor. In fact, with well-integrated mobile service, retailers can create a more cost-effective and automated operation and redefine the retail shopping experience. Compelling benefits include: 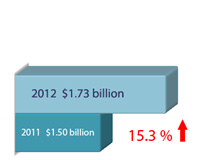 For retailers that have gone high-tech, the numbers are encouraging. In mid-2011, Nordstrom finished rolling out mobile POS devices–over 6,000 total–in its retail stores. By March 2012, the company reported a 15.3 percent increase in sales for the quarter to date, with retail sales totaling $1.73 billion versus $1.50 billion for the same period in 2011. Its e-commerce sales also saw an increase of 44.2 percent for the quarter ending April 2012 compared to the same period last year.

Coincidence? Not likely, given that small businesses are also reaping the benefits from mobile POS.

Says owner Paul Shenkman, “The system is dependable and our servers like it a lot; it’s a major part of our business. Our servers are more productive, and the capabilities for up-selling and suggestive selling with the mobile computers will continue to impact our bottom line.”

As with any technology, particularly one built around mobile accessibility, security is a legitimate concern for both retailers and consumers. However, the use of encrypted card readers and adoption of certified security standards in mobile POS systems ensure that sensitive customer information is never transmitted outside of encrypted form, reducing the risk of theft.

And, mobile POS devices are cheaper to purchase and maintain than traditional cash registers. The average price of a handheld device ranges from $200 to $700, with additional setup and transaction fees associated with the service. As the Chowder House case demonstrates, ROI more than makes up for these initial costs.

With terms like “omni-channel marketing,” “multichannel sales,” and “integrated retail experience” being bandied about, the shift to mobile POS is a logical extension of e-commerce strategy. Just as the cash register and barcode reader once transformed retail operations, so now is the smartphone. And given that today’s shoppers–armed with smartphones or not–are increasingly tech savvy and often more knowledgeable about product listings than sales associates, it can hardly be considered a luxury for retailers to adopt mobile POS technology. It’s now a necessity.