If you’ve been around for a spell, you might recall the browser wars of the last century. Alta Vista, Lycos, Excite, Yahoo. Those were the pre-Google days, when it was all about the Field of Dreams model of gaining eyeballs through “portals.” You build a portal with a search engine and content, and the masses will come.

Infoseek was one of those search engines until Disney bought it out. Disney content with Infoseek algorithms. Imagine that! Who wouldn’t want that as their desktop home page? 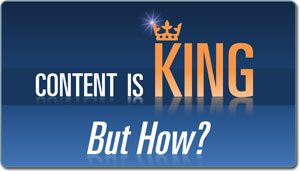 It was in the announcement of that buyout that the CEO of Infoseek at the time justified the merger with the statement, “content is king.”

The search engine wars resulted in a lot of casualties, thanks to Google. But one thing that survived those wars, and then survived Y2K, 9/11, the Red Sox winning the World Series, Charlie Sheen, the Twitter revolutions, and an unhealthy obsession with doomsday myths, is that statement: “content is king.”

So much so it’s become a cliché. And like all clichés, there’s both profound truth behind it and massive ignorance about what it actually means and how to employ it for your company.

If you’re a graphic novel publisher, that statement will mean one thing to you. If you manufacture pipe fittings, it will mean another. And if you’re a retailer that sells pipefittings (or graphic novels), it should mean something else entirely.

In this series of posts, I’m going to explain three imperatives of content creation: Stick, Drive, Convert. I hope the series will make it clear that not all content is created equal.

Understand Stick, Drive, Convert and your product will become the king of e-commerce. Get this wrong and you risk ending up with ineffective, overpriced content that drives away online shoppers.