Amazon Wraps the World in its Loving Embrace

As you might have heard, Amazon recently realized a dazzling quarterly report, soaring 51 percent in quarterly sales–and underscoring the continued e-commerce boom even amid an otherwise lousy economy. Barney Jopson of the Financial Times covered the online retail colossus’ latest tale of prosperity better than most. Jopson, as well as Amazon CEO Jeff Bezos, recognizes that consumers are, and will continue to, gravitating toward low prices and superior convenience (who the heck wouldn’t?). A particularly interesting–and perhaps unexpected–finding Jopson included is that a noteworthy 45 percent of Amazon’s revenue comes from six countries outside North America: UK, Germany, France, Italy, Japan, and China. So in case you didn’t know, Amazon is going seriously global.

And Speaking of Global …

Online coupon aggregator My Coupon Codes concluded an analysis of a huge 2010 Nielsen survey of 27,000 Internet users worldwide, and the findings are worth checking out. They determined that books and clothing are the items folks most intend to purchase online, followed by airline tickets and consumer electronics. The data also illustrates a pretty clear difference in online shopping habits between hemispheres. While  more than 80 percent of people from every region except Africa and the Middle East say they’ve shopped online, it seems those in Asia and Oceania do so even more diligently than their American and European brothers and sisters: 32 percent of consumers in the East spend more than a tenth of their income shopping online, compared to only 21 percent of consumers in the West.

Read the story at marketingcharts.com. 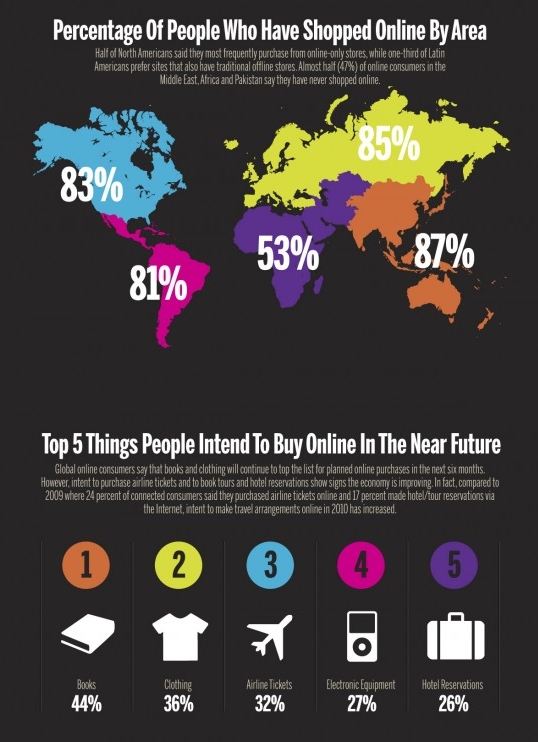