Look no further than Bruce Springsteen if you don’t believe me.

Lesson from the Boss: Billboard Forgives, but Not eBay

Long before content merchandising existed, a young guitarist named Bruce Springsteen threw a few product features into a catchy tune, named the song “Racing in the Streets,” and has since sung that song on stage 1,000 times to several million fans around the world:

I got a sixty-nine Chevy with a 396,
Fuelie heads and a Hurst on the floor…

If you’re a car geek, you’ll know immediately that Bruce’s ride rocks. The 396-cubic-inch V8 pumped out 425 horsepower, barely grimaced in the upper 6,000 rpm range, and could hit 140 mph if you had the guts to sit behind the wheel.

And while there’s some online debate as to whether Fuelie heads were the best choice for this car, the Hurst aftermarket shifter was golden.

But Bruce’s aim was Billboard, not eBay. His winning formula: sound muscular and cash the royalty checks. Having seen 20-plus Springsteen shows and owned at least one copy of every one of his albums in every format known to everyone from Jerry Garcia to Steve Jobs, I can attest that there are many things about Bruce one may want to emulate.

But his writing is not one of them.

Read on while I explain how to write factual, compelling content that leads to sales, satisfaction, and success. In other words…

Let me in I wanna be your friend, I want guard your dreams and visions.

Check out this Newegg product page for a SanDisk SDD for an example of user benefits. In particular, look at this one:

It’s a simple equation: The first sentence explains a feature, and the second sentence converts that feature to user benefits. It doesn’t cost much, and that added piece of content will increase consumer confidence and boost sales.

We’ll talk about the use of headers in a future post. But for now, if I were in charge of this product-page content, I’d include an abbreviated version of this equation in each of the headers for the cheaters (i.e., most of us) who only read headlines.

Sequential Read Speeds up to 450MB/s

Hammer home the user benefits of your product in section headers and shoppers galore will thank you with their credit cards. 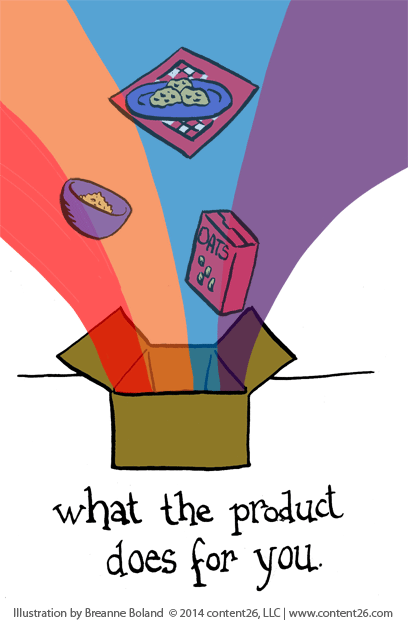 When a Benefit Defines the Product Feature

We could spend days highlighting merchandisers across every product line who don’t follow this rule. But in the interest of brevity, let’s look, somewhat randomly, at how top brands have addressed one particular feature of one particular product.

The product is cordless power drills, and the feature is torque.

Look torque up on Wikipedia and you might have flashbacks to high school physics. Don’t let the gibberish throw you off. At its heart, torque is a measurement of the “turning force” on an object, such as a bolt. Hence, it’s a very useful measurement for power drills.

The greater the torque, the greater the ability to drill into difficult materials. You don’t need much torque to hang pictures or install sheet rock, but you’ll want a high-torque drill to drive bolts into metal posts. And there can be a difference of a couple hundred dollars between a low-torque and high-torque drill.

However, very few, if any, drill manufacturers explain the user benefits of torque. For example, below is a summary of how the brands of the three top-selling cordless drills on Home Depot describe torque in their drill descriptions.

Ryobi 18-Volt Lithium-Ion Drill and Impact Driver: “1,500 in. lbs. of torque provide control and power when driving long and large screwed or bolts”

Us: This means that I can drill a bolt into, um, what exactly?

Us: Tough applications such as concrete? Granite? Krypton?

Compact motor delivers 400 in. lbs. of maximum torque, making it ideal for many construction tasks, including drilling into hardwoods, metal, and concrete.

How’s that for a last-chance power drive?

The winning approach to product copy:

Editor’s note: This post was originally published on 10/10/2011 at content26’s old blog, content26blog.dev. For this update we made minor edits and added a link or two.