A Baby Carrier Miracle, that is. (I’m surrounded by talk of babies and baby products lately, it’s getting to me.) I read a lot about product video–how badly consumers want it and how badly some people want to give it to them, for instance–but I don’t see many good product videos. Sure, Zappos and Amazon have tens of thousands of videos about shoes and backpacks in which a brogrammer narrates what is essentially an animated video montage. Frankly, I don’t get much from those videos.

I chose today’s product page on BabyBjörn for its video–one of them. One of the other videos (yes, there are more than two. Overkill?) might well be detrimental to its final score, but the one made an inspiring impression.

This page’s layout forces the same content into the dual roles of introduction and feature bullets, but that didn’t bother me. Neither did the little icons; they are useful for the overall impact.

Somewhat useful, at least. Would you know what the first one to the left meant without the phrase, “waist belt and flexible carrying for superior comfort”? I wouldn’t either. It looks like part of an airplane ad to me. The second one, on the other hand, is pretty clear.

The other candidate for an introduction–“cool and comfortable for both of you”–is about the specific airy mesh carrier model. Between the icons and heading text, I have a good sense of the product after a quick glance over the first part of the page.

The long-form content under the tabs is pretty stellar. These writers managed to combine product details, a good bit of explanation of those details, and the requisite cheery tone of a baby retailer into a narrative flow. That’s not easy. As far as I can tell, without actually possessing a baby I’d need a carrier for, everything one might want to know is covered.

Another plus is the “details” content smoothly integrated into the above-fold section (see below). This is a perfect example of how rich media and written content go hand in hand. 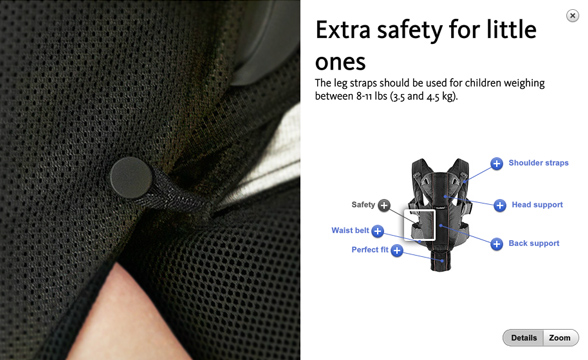 You’ll find the video that inspired this post under the Information tab, second one down: “The natural evolution plus instructional video.” Observant browsers may notice that a large chunk of this video is repeated in a separate video under a different tab. Confusing, but not the biggest organizational flaw of the page. I was far more put off by the last video, which actually is a montage, full of sweet parent-child scenes meant to tug at your heartstrings. I’m surprised they didn’t just throw pictures of puppies and kittens in around the edges.

I thought long and hard about what made this particular video special and finally decided to share the truth with you: it evokes two childhood films, Fantasia and The Labyrinth. The BabyBjörn video has a Tarantino-like quality–marketers, take note. Imitating shots in movies near and dear to the hearts of entire generations may well be the secret to video commerce success. Tell me you don’t see the resemblance between the mother-to-be on her spinning platform of natural evolution and Fantasia‘s Master of Ceremonies. 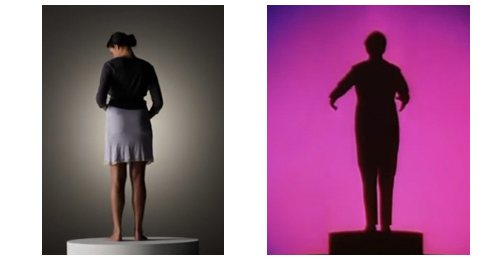 And for the second part of this video, the creators used a more recent classic. The instructional video is full of baby handoffs between that guy in the red sweater and someone off screen that reminded me of “Magic Dance.” Sadly, good screenshots of David Bowie holding a baby up in the air are nowhere to be found.

I was also struck by how well the images for each model of the carrier match the material types. The airy mesh carrier image, for example, has a pale background and bright light. The organic cotton one is full of earthy beige and plum hues. This page does not skimp on image quality or quantity–every bit of text has accompanying images–and that’s a good thing.

Maybe this section is hidden under one of the embedded videos. Maybe no one wrote it. Either way, this is a fail.

I like to imagine the package includes a small device like the one in Star Wars with a holographic projection of the man in the red sweater performing the instructional video routine. I might be disappointed to find it does not.

Surprised by this rating? I surprised myself. The product page is full of great design ideas, but it’s clumsy, almost like it’s tripping over itself. Almost like it’s relying on arrows scratched on stones that are being shuffled around by goblins behind its back.

I want to give the page 4 pings, but we must respect the math. BabyBjörn, you’re so close.