Continuing the content and commerce theme of last week’s critique, I checked out a new e-commerce site just launched by Popdust.com. As only pop culture can do, Popdust Style got a couple of things right and some things so, so wrong. (For the benefit of all my readers: Popdust is a music news site trying to make the world take pop music and its “biggest, most interesting personalities” more seriously. Or something.)

The store is suffering from a ghostly double of the sort created by Tesla’s teleportation device in The Prestige–the Karmin Pop-Up Store is a store within the Popdust Style store. Or is it? Product page URLs are identical. But I digress. Onto the hot pink trench product page.

More introduction is needed: Popdust Style’s marketing angle is to take a couple of pop stars (Karmin, musical duo/engaged wanna-be stars Amy and Nick), dress them up in a selection of clothes and accessories, film it, and throw it all together on a page called the Karmin Pop-Up Store. Got that?

The first sentence of this product description is about Amy’s outfit for the duo’s recent SNL appearance, which involved a hot pink trenchcoat. I dutifully clicked the video link to investigate; 30 seconds in, it was clear that pink trenchcoat and this pink trenchcoat are not the same, which makes the introduction even weaker. Also take note of the sloppy editing that allowed three hyphenated compounds, an unnecessary preposition, and the unbecoming combination of “she shed” in one sentence. 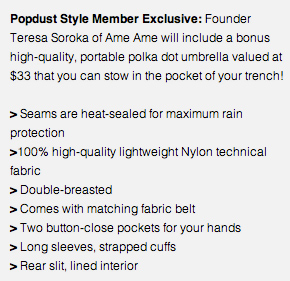 Editorial error number two: Leading with anything that isn’t about the feature product. I’m sure this free umbrella is great, but it’s not why shoppers are on the page.

Finally, we get to some text about the trenchcoat. It’s specific. It’s formatted. But it’s also kind of too little, too late. A list of physical details does not a product description make. (And there aren’t even pictures to accompany all those details.)

The page tells me this coat fits true to size, but doesn’t provide a size chart with measurements. It gives an estimated shipping time, but doesn’t mention cost. This copy is so very close to effective in some ways, but it is also is infuriatingly riddled with omissions and mistakes.

Two of the four product images are of the extra-special umbrella. And I have to say, it looks a little too big to comfortably store in a pocket. Missing from this row of images are shots of the back, the inside, and of the coat being worn. This last is particularly asinine given that we’re in the Karmin Pop-Up Store, where the the “adorably chic pop duo” are said to have tried all these items.

Speaking of trying on… Popdust’s marketing came up with the brilliant term “pop-up fashion store,” but I remain unsure of what that means. I assume it refers to the Popdust Dressing Room video, which is a lovely idea. Here’s a screenshot: 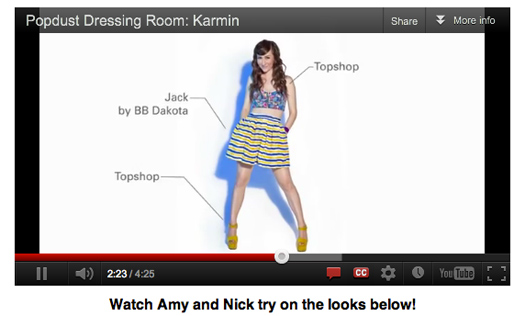 You know what’s wrong with this picture? I couldn’t take a screenshot of Amy in the hot pink trenchcoat, because it’s not in the video. So much for their big scheme. Half this video is spent watching Amy’s and Nick’s disembodied heads above a dressing screen while they answer fluffy questions about each other’s fashion. And hey, Popdust, in case you missed the memo, video is great because it provides a user experience that photos and text alone cannot. So don’t stick a bunch of still images from the product descriptions in your video.

I did say Popdust got a couple of things right. This is one. Simple enough.

Last week I complained about uncontrollable pop-up zoom that happens whenever one mouses over an image. Yup, that’s here, and it is as irritating as I remember.

But there are larger flaws–the odd double-store setup and the failed attempt to integrate media with editorial content on retail product pages. Video is underutilized. Images are inconsistent and lower quality than they should be. The pop-up concept is entirely absent in page execution, which is a shame.

This kind of cutesy pop culture retail attempt wouldn’t get my attention, but I can imagine it being successful. Of course, basing the store at launch around pop stars who seem more interested in the generic sort of celebrity that’s unreasonably common these days reflects Popdust Style’s comprehension of the basic facts of online retail, so I don’t imagine this particular attempt will last long.