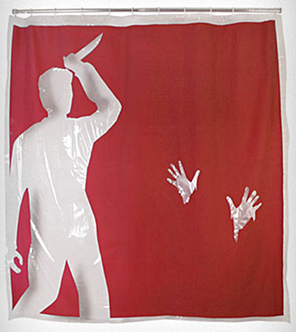 When I showed my mother a picture of the shower curtain I was getting for my new apartment, she said something to the effect of, “I find your decorating tastes strange and slightly disturbing, but I understand that our generational differences influence such things.” Actually, it was more along the lines of expressing gratitude that she knew what to expect when she wandered into my dark bathroom late at night during her next visit. The bathroom accessory that my mother feared to encounter unknowing? The Psycho shower curtain. This product can be found all over the web, from Amazon to sites like spirithalloween.com. Plasticland, the site of the page I’m reviewing today, calls it the Psycho Knife shower curtain, but I’m opting to use the more common name. One might point out to the company that using a variation on the standard name is not smart optimization, but I am not here to discuss SEO, so we’ll just move right on.

A product like this lends itself to cornball copy (something like “waking up in the morning is already scary” or “make your shower a killer experience”). It also begs for something more clever than cliché. Plasticland pulled this off by using a quote from the movie that inspired the design.

As Norman Bates says…’Hate the smell of dampness, don’t you? It’s such a, I don’t know, creepy smell’ … Keep the water in the shower with this wicked Psycho shower curtain.

One ping deducted for the use of “wicked” in the intro.

The first sentence contains more characters then the rest of the text combined–that includes bullet points. So no, not very informative. It’s made of vinyl. What kind? In the current “green” marketing trend, vinyl has become a hot topic because the term was long considered interchangeable with PVC. However, as you may now know, PVC is one kind of vinyl, the most hazardous kind, due to both manufacturing process and offgassing of chlorine. EVA and PEVA are popular, less hazardous alternatives to PVC in consumer products. (These products may be labeled as “green,” “eco friendly,” and “environmentally friendly.” For an apt warning on what will happen if we continue to use such concept words excessively, see xkcd.)

It so happens that this shower curtain is made of EVA, which is a plus. It also happens that when products are labeled as vinyl that usually means PVC, which is unfortunate for this particular page, since there’s no mention of EVA to be found. The rest of the copy covers dimensions and what’s in the package. Useful stuff, but not enough to make up for the palpable hole between the intro sentence and the buy button. And there, Plasticland, is an unplanned example of informative copy. 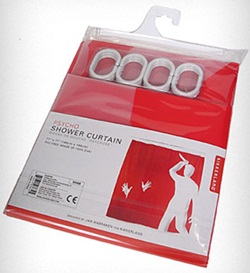 I have the advantage of owning this shower curtain, so I can confidently say the color is misrepresented in the picture above–it’s more bright red with a shot of orange than blood red, unfortunately. The color looks a little closer to life in the second image of the curtain in its package. This image, however, presents a different problem. See that set of rings inside the package? Do not be fooled: the text explicitly states that curtain rings are NOT included. Good on them for making that clear, but would it be so hard to use a picture that didn’t contradict the text? If it would, opt for leaving out the picture that confuses consumers, rather than trying to offset the power of images with text.

See above. Minus 3 for the image, plus 1 for the text.

I like this page. I like how much space is devoted to the visual, because that’s pretty much the point of the shower curtain. I like the website’s design. It’s a layout that would be tacky in the wrong web designer’s hands but is suited for this particular business, which is self-described as “purveyors of kitsch curiosities & retro clothing.” It helps that I’m kind of a sucker for all things invoking a traditional stage aesthetic, too.

Let this be an example of a nifty product (for some) and an appealing, user-friendly website failing to deliver a great product page. Exciting products don’t just sell themselves, even with excellent visual presentation. Hint, hint.