In honor of my visit to the content26 office in December, I’m reviewing an REI product page today. They’re also headquartered in Washington. More importantly, they have an entire mountain bike trail surrounding their original store (I didn’t ride it, but I did sneak a quick walk around when the store was closing for the night). Also in honor of my visit to Seattle, I spent some time online shopping for a rain jacket, a relatively important article of clothing that I have not owned for over three years now.

I didn’t purchase one, but I did quite enjoy cruising around the photos and videos and text for the REI Taku Jacket.

Can’t argue with versatile and backcountry pursuits. These intro sentences might serve as a complete clothing product description on other websites…

… but REI knows better than to stop there. Following that bold statement is a bulleted list of features and benefits. But my favorite part of the product description is the Specs tab, below. This is perhaps the most useful presentation of technical information I’ve ever seen. 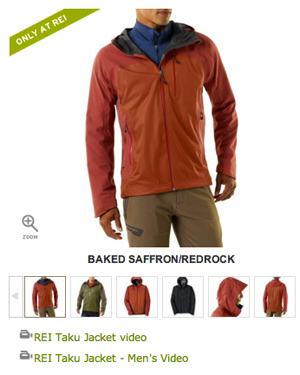 Yup, they have this one covered too. There are small images of each color from multiple angles (except the black one. What’s up with that?). The images are both traditionally and mouseover zoomable.

What’s more, there’s video! Two, in fact. The first (non-gender specific one) is, once again, perhaps the best product video I’ve seen. None of this solid background screen, boring tour of the product nonsense. There are people out in nature, walking around, getting caught in the rain, running up a snowy mountain, and conveniently taking advantage of all the features of this jacket. The second video is exactly the nonsense mentioned above, but without even a narrative. It’s basically an extended 360-degree view of the jacket performed by a headless model. Yawn.

From this point forward, I retain the right to exclude this rating when it doesn’t apply. I’m buying a jacket. I respect REI’s decision to not take up space by telling me that I’m buying a jacket. Unless it comes with secret accessories. In that case, let’s hear it, REI.

I’m still distracted by the headless models. And check out their hands! Weathered like serious outdoorsmen, but still perfectly groomed. A man’s man’s hands. A woman’s man’s hands. Old Spice’s man‘s hands. I suspect there were hand makeup artists behind the scenes. But I digress. My one recommendation is to move the introduction up, say below the price and above the order box, or add other product description text there as a hook.

There’s not much to take exception to on the Taku jacket page other than that weird second video. Given that it doesn’t detract from the form and function of the page, we might as well ignore it. I’m sure most consumers do.

Understanding the A9 Amazon Search Algorithm