Costco.com is a recent entry to the online marketplace arena, particularly compared to relative veterans such as their Seattle neighbor, Amazon. While not yet a top online retailer, Costco.com is still a great option for manufacturers who sell online. Here’s why you should be selling on Costco.com.

The David to Amazon’s Goliath

Costco.com is accessible to more people than its brick-and-mortar counterpart. Unlike Costco’s physical stores, you don’t have to be a member to buy. Instead, they assess a 5% service fee on all orders by nonmembers, which still results in good deals. 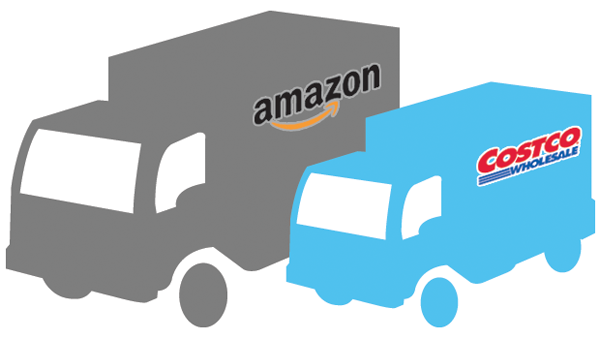 They’re also easier to work with in many ways than Amazon is. They don’t charge for product description upload, unlike Amazon, which usually assesses fees in the hundreds of dollars for even simpler, lower-priced items. Costco also pays its suppliers faster–in 30.1 days, on average, compared to 95.8 days for Amazon and 38.5 days for Walmart, per the Harvard Business Review.

Costco members are loyal. There are, per Costco.com’s company profile, currently 71.2 million members in 39 million households. (To say nothing of their 6.6 million business membership accounts.) Many of them are fiercely loyal and vocal about it, too. Do a quick Google search for “I love Costco” to get a quick anecdotal look at some members’ devotion. The top result of a similar search for Amazon is this article. A necessary evil indeed.

Costco in the Constellation of Online Marketplaces

Costco is often compared to Sam’s Club, the members-only branch of Walmart. There are certainly similarities: they both operate out of warehouses. They both require membership to shop. And they’re both best known for being great places to purchase comically large quantities of toilet paper.

However, while Sam’s Club has more locations than Costco, Costco’s sales volume is higher. It ranked 19th on the Fortune 500 for 2014 and passed $100 billion in sales for the first time last year. They began selling in Mexico in 2013 and partnered with Alibaba’s Tmall to start online operations in China in 2014. This adds to Costco.com’s existing online portfolio, which already serviced the United States, Canada, and the United Kingdom.

Costco sells in a variety of categories (17 primary ones, as of this writing). The most popular categories among our clientele have been home and kitchen and consumer packaged goods (better known as CPG). The requirements for enhanced content vary between categories, but we’ll get to that in our next post. First, let’s talk about the joys of syndication.

Content26 partners with Webcollage because they provide our clients access to hundreds of online points of sale with very little work. We’ve talked about syndication before, and it’s still a service we recommend strongly to most of our clients because it’s in most clients’ interest to sell more things to more people. (Writers can do math too, it turns out.)

The only downside, in this respect, to syndicating to Costco is that all of your product content must be created with their restrictions in mind, and their rules for content can be more complicated and difficult to deal with than even Amazon. This means your product content on every site you syndicate to must meet Costco’s perception of what makes a great product page, even if you would prefer to format or write your content differently for Bed, Bath & Beyond or Walmart.com.

(A note: syndicated content is not hard-coded on websites, instead being pulled via JavaScript each time the page is loaded. This frees you from concerns about SEO penalties due to duplicate content. Pretty great, right?)

Coming soon: Part two, in which we look at Costco’s content requirements, explain their sometimes-difficult review cycle, and give you tips to create your own strategy for selling on Costco.com.