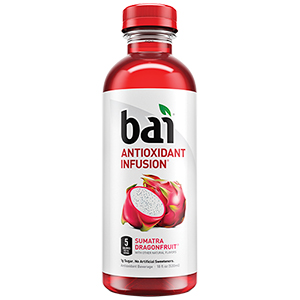 Background
Bai Beverages wanted to raise brand awareness by creating a targeted Amazon ad campaign based around the Super Bowl.

Solution
Content26 created 61 Super Bowl-specific campaigns and doubled the daily budgets of the top-performing 30 campaigns for one week surrounding the Super Bowl.

Results
Impressions rose significantly during the heightened campaigns to just over 1.5 million. The project helped Bai’s brand awareness rise, and the increased marketing budget resulted in ROAS of 2.6x.

For newer beverage companies like Bai, Amazon exposure is critical for generating product interest and finding new customers. To help expand exposure to their brand and separate it from competitors, Bai created a focused Amazon ad campaign for the 2017 Super Bowl.

Bai and content26 have been trusted partners since 2016 when the two teamed up to create enhanced content for over 50 products on Amazon and other online retail channels. For this ad campaign, Bai tasked content26 with managing 61 Super Bowl-specific Amazon Advertising campaigns that would run for one week around the big game.

This targeted search ad campaign was a piece of a larger national advertising effort that also included a television commercial with Justin Timberlake that ran during the Super Bowl and other ad campaigns run through Amazon. Since Bai was primarily focused on increasing brand exposure with this campaign, they were particularly interested in increasing the number of impressions generated by their ads.

To get more potential customers looking at Bai’s product pages, content26 doubled the daily budgets for 30 of their top-performing campaigns running on Amazon Advertising. The campaign budget increases began on February 2, 2017, three days before Super Bowl Sunday, and ran until February 8.

On the first day of the campaign, the targeted ads generated roughly 900k impressions. On the second day, impressions jumped to over 1.5 million. These elevated impressions remained strong for the entirety of the weeklong campaign, with the highest number of impressions coming on the final day of the push, three days after the Super Bowl.

Content26 increased the budgets in this campaign for all three types of Amazon search ads – Sponsored Brands, Product Display, and Sponsored Products. Sponsored Brand ads provided the highest Return on Ad Spend (ROAS), climbing from 2.65x on a regular weekend to 4.32x over Super Bowl weekend.

Sponsored Product ads also made a significant jump in ROAS.

On average, the elevated ad spends led to a higher ROAS for the campaigns, increasing from an average of 2.4x to 2.6x over Super Bowl weekend. Combined with highly increased impressions, Bai was happy with the way the targeted Amazon Advertising campaigns helped to increase their brand exposure and sales.

Get a Free Quote!

Content26 has been a global leader in ecommerce content for more than a decade, developing and managing the Amazon advertising and content strategies of many of the world’s most recognizable brands.